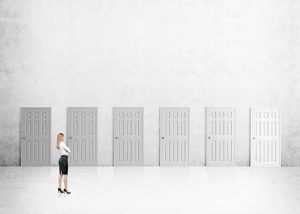 Susie* came to me for a coaching consultation. When we spoke, she seemed unsure of what she wanted from coaching. When asked about her coaching goals she struggled to answer.

I explained what life coaching is about, helping someone get from where they are to where they want to be.  The situation that Susie was in, not knowing what she wanted, is very common and life coaching could be a useful way to help her narrow down her goals.

One common misconception about working with a life coach is that you need to have a clear goal about what you want when you start coaching.

When you don’t have a clear goal about what you want, the coaching goal becomes figuring out what you want in order to set specific goals.  That is where Susie and I began our coaching.

We started broadly by having her understand more about herself in order to determine what is important to her, where she would like to be in her life, and where she is now in her life. We did this self-exploration using three exercises.

Susie and I spent her first two coaching sessions discussing the results of the exercises.  We started our conversation with her values. She said it was easy at first to mark all the values that were important to her but very challenging to pick her top five.  She finally decided on five – accomplishment, recognition, fun, connectedness, and adventure.  We discussed in depth what each value meant to her (note it is important to understand a person’s interpretation of each value as it can have different meaning to each individual). When asked how she is living her values today she pondered for a while and it became clear that accomplishment and recognition where a big part of her work life but fun, connectedness and adventure were lacking in her life.

The second exercise was also a bit of a challenge for Susie as she found herself getting caught up in the practicalities of what she wanted. She was finally able to let that go and create a list of what she would like her life to be in one year.  She also included what she did not want in her life.  If quickly became clear from this exercise that Susie’s vision was to have a rewarding career, close friends, fun activities, and travel in her life.  What she did not want was loneliness and emptiness.

The final exercise we discussed was her Life Audit. She seemed to find this a bit easier since it allowed her to focus on specific life areas rather than view her life broadly.  Her highest scoring areas were career, finances and family while her lowest scoring areas were friendships and hobbies/fun. She recognised that she had been so dedicated to her career that she didn’t give herself enough time to focus on other areas that she expected would just come naturally.  She realised by identifying her values and creating a future vision of her life just how important friendships, fun and adventure were to her.

After going through the self-exploration over two sessions, Susie felt she had more clarity on what she wanted in her life. I continued to work with Susie over several sessions to set specific goals and action items around the areas of friendships and hobbies/fun.  At this point she wanted the coaching to help keep her accountable to sticking to her action items as she feared she would slip back into her habit of putting her career first.

Susie and I finished working together after three months. During our last session, I asked her to review her original scores she gave her life areas to see if there were any changes.  She was pleased to see the areas that were lowest had improved. She was also surprised to see other areas had improved as well, even though she didn’t directly focus on those areas. When asked what she gained most from the coaching experience and she said “I felt so overwhelmed before I started coaching and couldn’t see a light at the end of the tunnel.  Through coaching I realised how much my life could be improved by understanding what is important to me and making some small changes.”

My experience working with Susie reminded me of the importance of self-exploration.  We often get so busy in our lives that we can feel overwhelmed and unfulfilled.  By dedicating time to look inward to what is missing in our life or where life is out of balance can have a significant impact in helping gain clarity in order to set goals and actions towards greater fulfilment.

*Client name and specific coaching details have been changed to protect client’s privacy.